Articles / Working with ASGI and HTTP

Our previous article introduced the ASGI protocol, and covered why having a standardized low-level server/application interface is useful, and some of the motivations for the Python community to move beyond the existing WSGI servers and start adopting ASGI.

In this article we”re going to start taking a look at the building blocks of ASGI, and demonstrate how we can start using them to write web services.

As an application developer you won”t typically be working with ASGI at the low-level, since the framework generally present a higher level interface to work with.

ASGI is structured as a pair of callable interfaces.

The first API call is a regular function call, which is made to set up a new stateful context.

The second API call is an async call, which presents a pair of communication channels over which the server and client message each other.

Here’s how the basic structure looks:

Let’s go over the arguments to those interfaces:

A dictionary of information that is used to setup the state of the application.

ASGI can be used for various interfaces, not just HTTP, so the most important key in this dictionary is the "type" key, which is used to determine what kind of messaging interface is being setup.

Here’s an example of the scope for a simple HTTP GET request to “https://www.example.org/”…

An async function that takes a single message parameter and returns None. In the case of HTTP this messaging channel is used to send the HTTP response.

There are two types of HTTP response message: One to initiate sending the response, and another to send the response body.

An async function with no parameters that returns a single message. In the case of HTTP this messaging channel is used to consume the HTTP request body.

Let’s put all that together into our first simple ASGI application:

You can now run the application using any ASGI server, including daphne, uvicorn, or hypercorn. 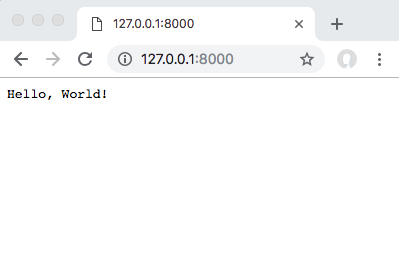 Not super exciting just yet, perhaps? Still, it’s the basis for a whole set of functionality that isn’t possible with Python’s existing WSGI interface.

There are various different ways you can structure an ASGI application:

1. Using a closure to bind the scope to an ASGI instance…

2. Using functools.partial to bind the scope to an ASGI instance…

3. Using a class-based interface to bind the scope to an ASGI instance…

The class based interface will tend to be quite common in ASGI implementations, since it instantiates a single object on which state can be manipulated over the lifetime of a single request/response cycle.

Working at a higher level

Although it’s important to understand the fundamentals of how ASGI works, you don’t want to be working at the low level interface most of the time.

The Starlette library provides request and response classes that you can use to handle the low-level details of reading an incoming HTTP request and sending an outgoing response.

The Request class takes an ASGI scope, and optionally also the receive channel, and presents a higher level interface onto the request.

Here’s an example of using both requests and responses together:

The response instances present the same interface as any other ASGI instance.

To actually send the response you call it in the same way:

That’s a nice property because it means we can use a response instance as if it was the second half of an ASGI app.

In the example above we’re not actually using any asynchronous network I/O or reading the request body, so we can simplify things a bit.

And running our application:

Although it’s important to understand the fundamentals of ASGI messaging, this isn’t the layer at which we’ll typically be spending out development time, so we’ve also seen how we can start to abstract those details into higher level request/response interfaces.

We’ve covered the following terms, which we’ll need whenever we’re talking about the mechanics of working with ASGI:

We’re also starting to use the Starlette package, which gives us the fundamental set of tools that we need to work with ASGI at a higher level of interface.

In the next article in the series we’ll be exploring ASGI HTTP messaging in more detail.